Famed as the origins of Charles Darwin’s theory of evolution, the Galapagos Islands are a place like no other on Earth. With more endemic species than anywhere on the planet, this archipelago is a paradise for wildlife photography. Our Galapagos Islands photo gallery includes images of blue-footed boobies, marine iguanas, cute sea lion pups, and the only penguins to live north of the Equator. Explore Galapagos pictures today with our Galapagos gallery. 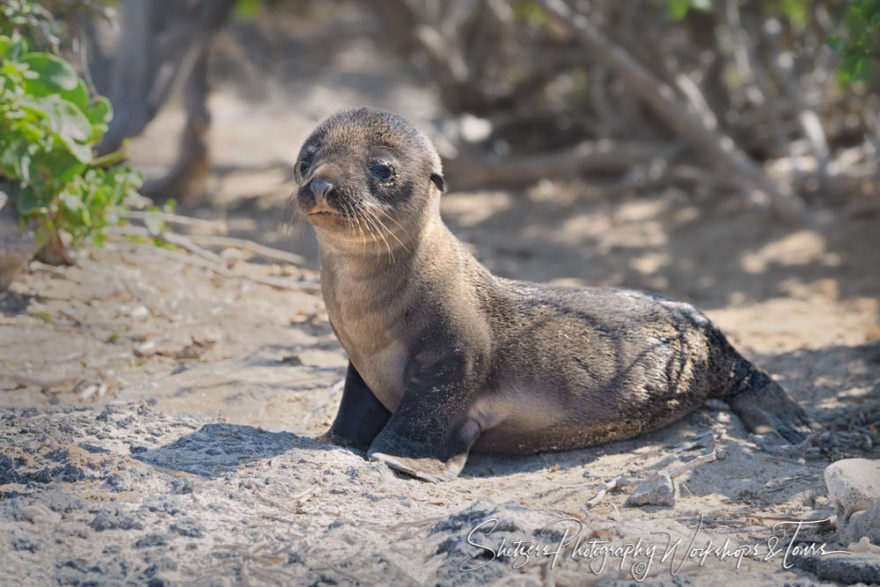 Adorable Galapagos Sea Lion PupA baby Galápagos sea lion waits on the sand for its mother to return with dinner. While she’s gone, it might do a bit of hunting of its own.

Although Galápagos sea lion pups spend several months getting weaned by their mothers, they’re capable in their own right. A group of young Galápagos sea lions was once seen ganging up to drive a shark away from their home beach! Blue Footed Booby Sitting On EggsA blue-footed booby sits on its eggs, keeping them out of the harsh Galápagos Islands sunlight. The male and female boobies take turns foraging for food while the other one incubates the eggs.

When the chicks hatch, the boobies’ famous blue feet will come in handy. The defenseless babies will sit on their parents’ feet in the shade of their bodies, safe from both the sun and the sand, until they grow enough plumage that they can safely step out. Marine iguanas are herbivores. They’re adapted to swim through salty water and feed on algae. Special glands filter the salt out of their bloodstreams and secrete it above their noses, forming their recognizable salty wigs. Galapagos Marine Iguana On Green BackgroundA Galápagos marine iguana poses on a rock. It has darker scales than some of its cousins on other islands, reflecting how this species has evolved in different ways to suit the many environments of the Galápagos.

Marine iguanas are the only lizard in the world that’s adapted for swimming. Naturalists theorize that they all descend from common ancestors who drifted away from the mainland on floating logs. Galapagos Penguin On RockThe sounds and movements of Galápagos penguins like this one are able to express a wide range of emotions. Galápagos penguins mate for life, and have a special set of cries and moves that they save for their mates and chicks.

As this penguin stands tall, it might be coating itself with preen oil, waterproofing for a dive in the chilly sea. Galapagos Sea Lion And Blue Footed BoobiesA Galápagos sea lion drops by to give these blue-footed booby parents its best wishes on their new baby. The boobies probably have nothing to worry about -- Galápagos sea lions prefer to get their food underwater.

The blue-footed booby chick stands out due to its fuzzy, soap-like plumage. While still a fledgling, these feathers can get so poofy that the baby looks bigger than its parents. Galapagos Sea Lion Head RaisedWhen Galápagos sea lions raise their heads like this one is doing, it’s either to scout an uncertain territory for threats, or to keep from having to touch something uncomfortable. This sea lion’s layer of fat keeps it safe from hot sand and rough rocks, but its head is more exposed.

Photograph taken on North Seymour Island in the Galápagos Islands.

Large Colony Of Marine IguanasMarine iguanas get along well with others, but compared to birds and mammals who live in similarly large groups, they’re not as expressive of their friendship. You’re more likely to see them lying around having a nap than grooming each other. Lava Lizard And Marine IguanaIf you’ve ever raised a child, this photo of a lava lizard and a marine iguana in the Galapagos Islands might be something you can relate to. Bartolome Island Galapagos PenguinBartolome Island has some of the most famous views in the Galápagos Islands, including the volcanic spire of Pinnacle Rock. It’s also one of the best places in the archipelago to spot Galápagos penguins.

This one looks pretty pleased with itself, so the fishing must have been good today. Note the short bill that’s perfect for snapping up small schooling fish. Blue Footed Booby Looking At CameraWhether you’re a human or a blue-footed booby, sometimes you really don’t want to have your picture taken.

But we couldn’t pass up the opportunity to get this close to one of the best-known symbols of the Galápagos Islands. Blue-footed boobies have gained worldwide fame for their unmissable feet, their goofy mating dances, and their habit of raising their kids inside a ring made out of their own guano. Cute Galapagos Sea LionsA pair of Galápagos sea lions enjoy each other’s company. Male and female sea lions are easy to tell apart due to the male’s much higher weight and prominent bump on his forehead.

Instead of having a “harem,” like some other pinnipeds, male Galápagos sea lions capture and hold beach territories and mate with any females who happen to live there. If males can’t hold a beach, they move off to a bachelor colony, and try again next year. Galapagos Penguin PosingThis endemic Galápagos penguin might look a bit awkward and pudgy on land, but don’t be fooled: it swims so fast through the water that you’ll never be able to keep up.

The fat is important too. The seas around the Galapagos can get chilly, and a layer of fat is the best way to stay warm. Galapagos Penguin Preparing To DivePenguins in colder climates are famous for “tobogganing,” where they lie on their bellies and push themselves across the ice with their feet.

The Galápagos penguin, the only penguin found north of the equator, doesn’t see much ice. When you catch one on its belly like this, it’s almost certainly getting ready to dive for its favorite fish. Galapagos Sea Lion Playing With Puffer FishGalápagos sea lions are as playful as any of their pinniped relatives, and this picture proves it. Puffer fish are some of their favorite toys: they bother the fish until it bloats up in self-defense, then toss it back and forth like a ball. Captive sea lions who play with beach balls are emulating this behavior.

This photo was taken on Sombrero Chino/China Hat island, a heavily protected isle in the Galápagos. Galapagos Tortoise On Santa Cruz IslandClose-up on a venerable Galápagos tortoise. This one’s ability to raise its head high is more than just a good photo pose -- it also gives us a clue about its habitat.

Tortoises who live on greener islands with lots of shallow water have broader shell brims that keep their heads closer to the ground. This tortoise, who can lift its head to browse for a wider range of leaves, likely lives on a drier part of Santa Cruz island.