What a great trip and fantastic guests !!!!   We have never had so much field time as we did this week due to the cooperative weather and eager to photograph guests.  With all the Alaskan summer light, we were able to be in the field on average 13-14 hours per day, enabling great pictures of Alaskan Grizzly Bears, or Brown Bears.  During the week, we were fortunate to watch and photograph the bears eating, nursing their young, cubs playing, bears fishing for salmon, and clamming.  As well as photographing the grizzly bears we were able to photograph Horned and Tufted puffins and Bald Eagles.

Below is a recap of the 2013 Grizzly Bears of Alaska Photography Workshop.

We all made it to Anchorage and enjoyed the beautiful weather the Alaskans were having this summer.  Once we all gathered, we went out to dinner at a restaurant right on Lake Hood, the largest float plane lake in the world.  While we enjoyed the sunny evening outside on the patio, we got to know each other and share stories while watching the float planes take off and land on the lake.  After dinner, we enjoyed a guitarist perform with some cold drinks as the day came to a close.  We are all excited as we prepare for our trip to Lake Clark National Preserve tomorrow.

Another beautiful day in Anchorage with a cloudless sky.  As we arrive at our charter of two Cessna 206’s to fly us to Lake Clark’s Silver Salmon Creek, we are informed that the lodge is currently fogged in. Once we get the go-ahead from the lodge, we tossed all our gear in the plane and took off.  We were very fortunate to have clear skies and a smooth ride, and see Mt. Spur, Mt Redoubt, and Mt. Ilamni,which is an active steaming volcano.  In addition to the mountain ranges and glaciers out the window, we flew over a large group of Beluga whales. Our pilots landed us on the beach with perfection, and we were met by our Bear guide for the week, Barrett.

Barrett met us with an ATV and trailers to transfer us back to the beautiful Homestead Lodge where we were shown our rooms and met the owners James and Sheila.  Once settled, and after a delicious dinner of fresh salmon caught today, we were off to photograph the bears until 10pm at night (still full light at that hour) We woke up to a little fog at 6am, enjoyed a home cooked breakfast by the lodge chef Linda, and opted to meet in the lodge and discuss different photography techniques to capture quality images of the bears while the fog burned off.  Shortly after 7, the fog lifted and off we went out into the field.  Barrett, the bear guide was all ready for us, and we loaded into the ATV and trailers to get us around quickly and keep us on the bears.  We ran right into a beautiful Sow and her two spring cubs.  Spring cubs are cubs born this last winter, therefore they were only 7 months old, and very cute. 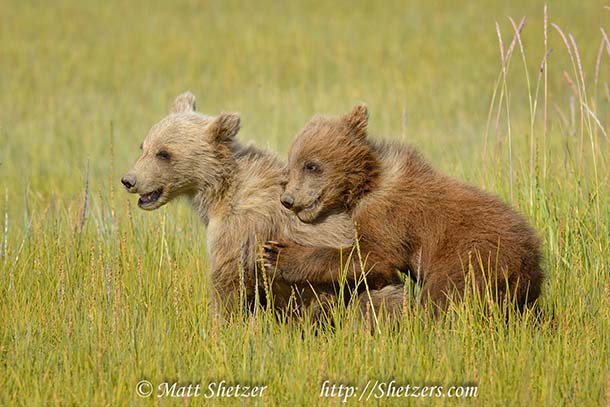 After photographing the bear family, and watching their interaction with each other, we then photographed a 4 year old bear still with her winter fur on her face, however shedding on her back end.  She was affectionately nicknamed by the group “Fuzzy Britches”.  Between photo sessions in the field today, we would return for great meals prepared by the chef.  All who enjoyed Linda’s cooking felt they might gain weight on this trip. Another busy day of photography came today as we photographed the grizzly bears.  We spent a lot of time photographing a large bore in the sedge fields, and more time with a family of bears (sow and two spring cubs).  The small cubs entertained us while they played with each other and wrestled around the grassy fields.  We were all giggling at their clumsiness and busy clicking away at the cameras capturing cute images.  The cubs are learning valuable skills for later in their lives as their fighting skills improve with their horseplay.  The highlight of the day was when a sow brought her two young cubs within 6 feet of the group ( Yes 6 feet !!!) More beautiful weather !!!  Today we photographed a gorgeous orange sunrise as a bear dug for clams on the beach with the stunning mountains of the Lake Clark National Park in the background.

Bears and mountains – Does is get any better than that?  We were fortunate to watch the bear dig the clams and open them enjoying the clams for a couple of hours until the tide covered them up.  After that, we photographed some bald eagles in the trees, and then ran into a sow with two cubs once they awoke from their nap.  Freshly rested, the cubs played and played as mom dined on the sedge. Off in the distance was another sow and spring cubs, but we opted to stay with the playful bunch.  Once the family left, we ran into the 4 year old bear again, with scenic mountains in the background.  We worked on our wildlife landscapes composing the bear with the mountains for the perfect back-county Alaska photograph.  Another opportunity came to photograph a large male bear in the colorful sedge, and we head back to the lodge and get ready for another day of adventures ! Bill enjoying a close-up of an Alaskan Grizzly Bear

Another beautiful sunrise photographing the bears clamming, and due to a spectacular orange sunrise, we silhouetted the bears with the colorful sunrise to create some great landscapes.  After natures show was over, we moved around and photographed the bears some more as they picked out the clams.  A little more time with a sow and cubs as we refine our images and shot different angles. Our trip to Bird Island to photograph Horned Puffins.

This afternoon we are taking the optional excursion. A short 30 minute boat ride to Bird\Duck Island to photograph the Horned Puffin, Tufted Puffin, Common Murre and Kitty-wakes.  The puffin, nicknamed “Clown of the Sea” is a seabird with lots of character, a colorful beak, and very enjoyable to watch.  Our captain, Oliver, circled the island to allow us to see the puffins in the water, and enjoy the scenery of this rugged island.  After the loop was complete we gathered all of our gear, and the boat was nosed up to the island, as we hoped onto the beach to photograph the puffins from land.  The captain was very generous with the time, and we had 3 1/2 hours to photograph these cute birds.  We all captured great images of these cute little birds as the pairs displayed a  brooding behavior, groups played with each other, and individual puffins brought back fish to the burrows.  We also worked on in-flight photography techniques for these quick birds.  After leaving the island we went to a Kitty-wake rookery, and abandoned cannery operation.

Getting back a bit late for dinner, we enjoyed another tasty meal caught that day, and we were back out filming the bears until 10pm.  This evening we photographed the bears in the backyard of the lodge, as they played under the small airplanes in the backyard (The only transportation to and from the towns).  When we left the yard, we photographed a sow and yearling cub (a cub a year and a half old) on the river, with the mountains in the background.  One of our favorite images as we photographed this pair drinking from the river side by side with the rugged Alaskan mountains in the background.  Our first bit of rain came into tonight as we wrapped up a long day in this beautiful location, and very day successful for all the guests ! This morning we photographed at sunrise during the low tide.  The bears were still sleeping, so we focused on the colorful sunrise with a couple of fishing boats as our subjects, and some neat patterns in the sand cause by the large tides in this region.  After breakfast, we headed back out and photographed a young bear in the purple fireweed.  After the young bear, we then found a large female brown bear fishing on the mouth of Silver Salmon Creek.  We watched as she would track the fish from the bank and then leap into the water chasing the fish.  Spectacular action shots were captured by the guests with bear teeth out and water flying. We then ran into a sow with two cubs in the grass, and then a close up bald eagle that just landed on a salmon on the bank.  We watch the eagle eat the fish for awhile, and then captured great in-flight images of this beautiful bird.  After the eagles activity, we watched a large female grizzly bear fish in the Silver Salmon Creek.  Later that day, a sow with two cubs were cuddling on the beach, with mom lying down, and the cubs cuddling up tight with here.  Later in the evening, we photographed 2 male bears working the river and eating sedge.  After dinner we returned to the meadow hoping to get shots of bears in this scenic meadow with fireweed and mountains in the background.  We were lucky to find two males in the meadow who were bluff charging each other.  The rains started at 8:30pm, and we continue photographing the bears to capture images showing the texture of the bears wet fur.  On the way back to the lodge we saw two other bears in our short ride home. Today we say farewells to our gracious hosts, but first we slipped out for a little sunrise photography.  We had a great morning photographing a sow and cubs fishing at the mouth of Silver Salmon Creek.  While mom fished her cubs played on the side of the river.  We later saw 2 males brown bears on the beach clamming in the surf.  We headed back for breakfast, and to say goodbye.  While on the beach waiting for our flight we were enjoying the scenery as we could see 7 bears on the beach clamming. Our chartered Cessnas landed on the beach right on time and we were off on another scenic flight back to Anchorage.

Once safely back to Anchorage, we all said goodbyes and headed home or on another adventure. Bears Saying Goodbye until next year